For the last few weeks, I have been making new recipes inspired by famous meals featured in movies. I have many more movie inspired recipes I plan to try out, but here are some of my favorite recipes I have cooked so far.

The Scene: the Trunchbull calls for a full school assembly that comes to a weird and dramatic crescendo when she demands that Bruce Bogtrotter eat an entire chocolate cake. 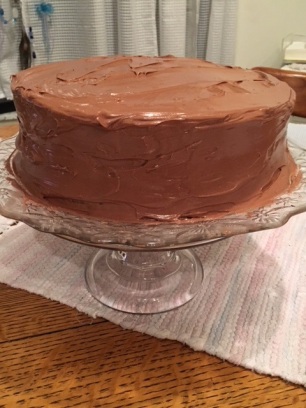 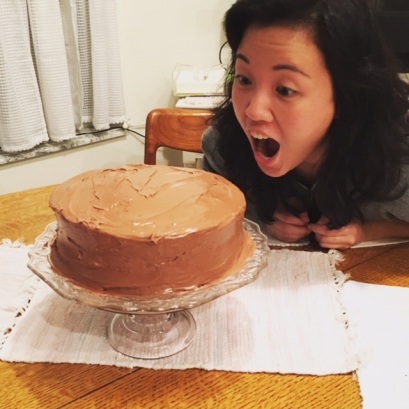 The Recipe:  I used a recipe from Ina Garten to make my chocolate cake and frosting.

This was well outside my culinary comfort zone, and while the cake didn’t come out perfectly, it tasted pretty delicious.  The frosting, which was basically just a decadent saturation of melted chocolate and butter was particularly tasty (but then again, how do you go wrong with chocolate and butter?)… I like to think both Bruce Bogtrotter and the Trunchbull would have been pleased with the outcome.

Shrimp Linguini from Something’s Gotta Give

The Scene: After Erica Barry (Diane Keaton) discovers her daughter’s boyfriend (Jack Nicholson) in her Hampton’s kitchen in his boxers, they go to the airy Hampton’s market to pick up ingredients for a casual/elegant dinner.

The Recipe: In a large pot of boiling water, cook pasta for about 10 minutes or until al dente.  Over medium heat, saute shrimp with garlic and onion. Add lemon slices and lemon juice. Best served with a glass of white wine.

Orange Chicken with Peas and Rice from The Hunger Games

The Scene: While this scene was briefly featured in the movie version, this was much more prominently described in the book…

“Cinna invites me to sit on one of the couches and takes his place across from me. He presses a button on the side of the table. The top splits and from below rises a second tabletop that holds our lunch. Chicken and chunks of oranges cooked in a creamy sauce laid on a bed of pearly white grain, tiny green peas and onions, rolls shaped like flowers, and for dessert, a pudding the color of honey.

I try to imagine assembling this meal myself back home. … Days of hunting and gathering for this one meal and even then it would be a poor substitution for the Capitol version. What it must be like, I wonder, to live in a world where food appears at the press of a button?”

The Recipe: I based my recipe off a recipe I found from a Fictional Food blog. Saute chicken on medium heat. Remove chicken from heat and add frozen pearl onions with butter. After about 3 minutes (or until onions have partially cooked) add frozen peas and cook until warmed.

One of the most pivotal and iconic parts of the recipe called for an orange cream sauce. The thought of a citrus based cream seemed like a terrible idea, but I was pleasantly surprised both by how easy it was to make as well as how tasty it was.  To make it, I made a simple roux (by melting butter and adding flour) and added heavy cream and milk with about a cup of orange juice and the zest of one orange.